Surface Distortion (2016) is a progressive and interactive couture design that is focused on an all-encompassing experience in which fashion, technology, music and architecture merge together, The design is developed by fashion designer Maartje Dijkstra in collaboration with music producer Beorn lebenstedt aka Newk and programmer LIN. A big inspiration when creating this piece is the location, where she first launched the project during the Future Flux Festival in Rotterdam. This art and technology event took place in an old submarine pilot, located directly at the waterfront in the harbor of Rotterdam. The industrial building gave her the inspiration to create a piece that captures this same feeling. The dark grey dress is totally build up out of manual 3D printed parts, meaning using a 3D printer pen as a tool to create textures, all sculptured together by hand with black polyester wires. The different structures and shimmering layers are inspired by chitin, the building material of exoskeletons of insects. Integrated into the dress are 15 EL light panels with special 3D moire effect (watered silk) that refers to the movement of water. For the presentation in the pilot Newk composed a track using samples of sonar and sci-f movies and hardcore beats. Light designer Co2RO used lasers, stroboscopes and old school overhead projectors to created a composition of lights that interacted with the beats and melodies of the music and with the light panels inside the dress so it all merged together into a spherical performance. 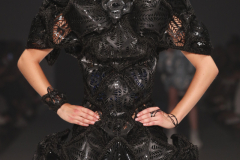 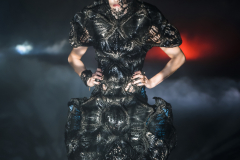 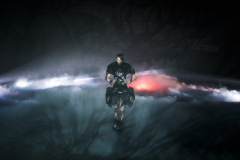 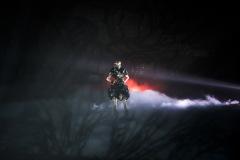 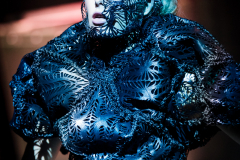 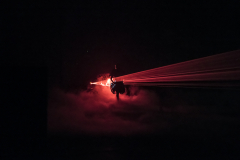 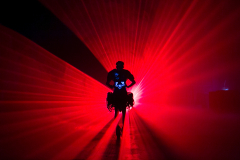 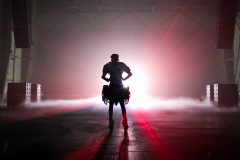 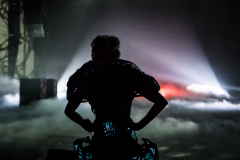 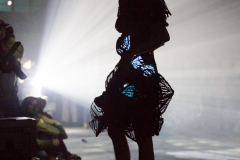